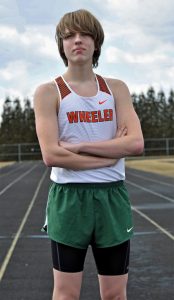 Jacob DeMuth, a senior runner on the distance crew, has been part of the track and cross country teams for four years. Interestingly, his initial debut was not made by choice. DeMuth stumbled upon the sport of running almost by accident, and has a unique story of how he came to be on the team.

“I actually started running as a punishment for sneaking out of the house,” DeMuth said. “I ended up sticking with it after two weeks, and have been a part of the team ever since!”

Through that lucky twist of fate, what started as a form of discipline ended up becoming something DeMuth truly loved. Now, as a senior member of the squad, he encourages the underclassmen to embrace the sport wholeheartedly from the start, and work toward future goals.

“My advice to the younger kids is to put in the hard work early on,” DeMuth said. “I know when I was a freshman and sophomore I didn’t take it too seriously, but now that I’m older I realize that if I would’ve had more focus in the beginning my times would be a lot better.”

Throughout his four years, DeMuth has gained incredible friendships and created memories to last a lifetime, but one that he’ll always remember took place just last year at the Conference meet.

“My favorite memory is definitely winning Conference last year for first time in 10-20 years,” DeMuth said proudly. “Afterwards, a group of us ordered 200 chicken nuggets, and I ate 30-40 myself! Nick got a milkshake and couldn’t handle the drive home, it was just a great experience all around!”

That being said, it’s not difficult to guess what DeMuth’s favorite post-race meal is.

“Chicken nuggets for sure,” he said. “preferably from McDonalds.” 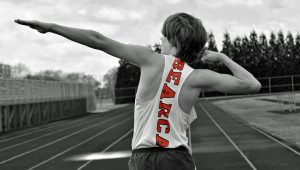 DeMuth, affectionately nicknamed “Big Sip”, has fashioned close ties with his coaches as well.  Though they’ve all preached many words of wisdom over the years, one quote from Coach Bunda stands out the most.

Although, with the amount of words he shares on a daily basis, it’s tough to choose just one great Bunda phrase.

“In the time it takes Bunda to give a speech, I could complete the entire practice,” DeMuth joked. “The warm up, the actual workout, the cooldown…everything, and even then he’d probably still be going strong!”

With so many amazing years invested in a great program, surrounded by incredibly special people, DeMuth said he’ll miss those close connections he’s made the most.

“Honestly, I’m really going to miss my teammates,” DeMuth said. “It’s going to be sad losing all of them. I had a lot of fun with these guys, and I’m so glad I decided to come out for track and cross country these last few years.” 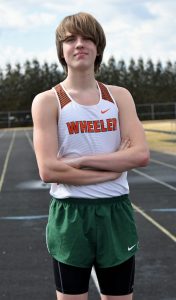 With his laid back and spontaneous personality, DeMuth radiates genuine positivity, and is always up for new experiences.

“If they wrote a book about me, it would be called ‘Big Sip’s Big Adventure’,” DeMuth said.

That’s exactly what these past four years have been for him: an unforgettable adventure. The Wheeler High School track team thanks Jacob for choosing to stick with them on this incredibly successful journey, and wishes him all the best as he begins his college career at the end of this season. Go get ‘em Big Sip!