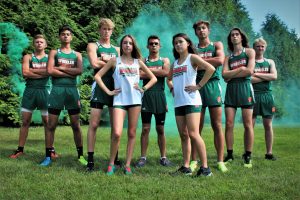 Famous artist Andy Warhol once said, “The idea of waiting for something makes it more exciting.” Three seasons have passed with redemption on the minds of members of the Wheeler High School cross country teams. “While (last year) was seen for most as a successful season, these athletes are hungry for more,” Coach Luis Guillen reiterated. “Their training levels have improved with a brand new mindset of accountability as well as being diligent in their preparation throughout the summer.”

After returning from what some athletes called a life-changing experience in the mountains of Tennessee, the culture of the program has changed. Communication has improved amongst teammates and a bond of trust has been developed to implement not just running goals during the season, but life goals as well.

A few new faces also joined this season with a handful of freshmen joining the ranks in Nolan Henslee, Josh DeRolf, Maddie Sullivan, and Emily Enright being assimilated into the ever growing family that is Bearcat Cross Country.

“We are really excited about gaining new people either through move-ins or the middle school, Coach Kosal does an amazing job recruiting on his end and I do my part on my end.” Coach Guillen said. With nine seniors departing after this season, replenishing the cupboard is never a bad thing.

Speaking of those seniors, they want to get their last season off on the right foot (pun intended). With individual goals such as personal bests, conference honors, or moving onto a next level of the IHSAA tournament in mind, many of them are ready to do what is necessary to have the best season ever.

“I’ve seen a difference in them (the seniors), a different fire in their eyes so to speak, to work harder, to be better leaders, and to leave a lasting legacy for their younger teammates, to say I’m proud is an understatement.” Coach emphasized.

The Bearcats have been working hard all week  on their home course on the campus here at Wheeler. With ten teams coming for the 6th Annual Bearcat Invitational this morning, it should be a a competitive meet with the girls hoping to defend their title and the boys hoping to improve upon their runner-up finish from a year ago. With all that they worked on during the summer and learned about themselves and each other, the outlook for this squad looks very positive.